In August of 2013 (almost three years ago), I decided to undertake a second “Epic Film Challenge.” The original movie watching and video making challenge was one born out of a desire to watch more films. I had been a movie lover for my entire life, but in my early 20s I realised that I had really slacked on one of my greatest passions. So the idea to watch 366 films in one (leap) year was one that greatly appealed to me, plus, I could make it a series on my YouTube channel.

I started on the 14th July 2011, and ended it exactly a year later in July 2012. My fiancee Connie also joined me on the Epic Film Challenge whenever she could, and making all of those video reviews was a lot of fun. For the most part they were very simple, one take videos filmed very roughly, and that’s all it ever needed to be, documenting the process. Occasionally for landmark episodes I would make them feel a bit more special, with an edited review, a skit, or even a montage video including a clip of every film we had watched, in order, up until that point.

The views on the series were not good, some videos didn’t even break ten views, which was disheartening, but ultimately the sum was greater than the parts, and 366 videos later, I felt like I had not only achieved something, but changed my movie watching life forever. While I still hadn’t quite embarked upon the broadening of my horizons that would blast open all the possibilities film has to offer, through the years and across the world, I definitely made the first move. I watched Seven Samurai.

It was a formative experience that made me realise just how incredible this old, black and white Japanese film was, and I wondered if there were more classics out there, perhaps films I’d never even heard of, that were of the same quality. Now for argument’s sake, I still haven’t, and Seven Samurai remains for me the best film I’ve ever seen, half a decade since I first saw it. But man, that’s a pretty high bar, and coming underneath it is really not bad. Since The Epic Film Challenge I have branched out to areas I never would’ve dreamed of exploring, like the silent era of film, now one of my favourite periods, containing some of my absolute favourites. This is something a pre-Epic Film Challenge Luke would never have conceived of.

A year after that first Epic Film Challenge, or EFC I, for short, I felt an urge, a tingling. An itch that needed to be scratched, and that itch arrived in the form of Steven Jay Schneider’s collection of films and reviews in the book: 1001 Movies You Must See Before You Die. 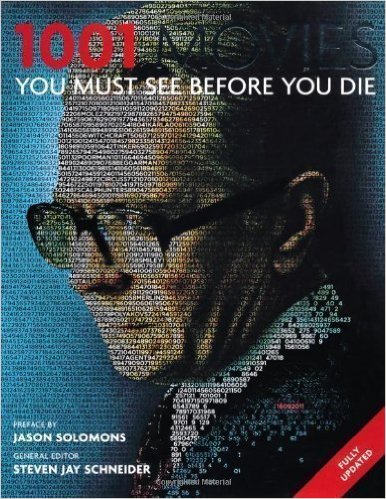 My eyes instantly lit up when I first saw this book, and after picking it up to leaf through its pages I simply never put it down, taking it straight to the cashier. “I’m going to do this,” I thought excitedly as I exited the shop, knowing it wasn’t simply an idea, it was meant to be. I was going to seek out, watch, and review, every last damn film in this book. At the time it seemed like a monumental challenge, one worthy of the “Epic Film Challenge” name, and thus, a new series was born, and launched, in August of 2013. Connie agreed to once again by my partial partner in the series, joining me when she could, attempting to also branch out a little with films she wouldn’t ordinarily watch.

The Epic Film Challenge II: 1001 Movies You Must See Before You Die – Our introduction video, August 2013.

This time though, we wouldn’t just watch a film, then make a video talking about it before offering our standard rating out of 10. We would judge the premise of the book also, and ask ourselves the question: Is this a movie you should see before you die? It started off well, with a few fun videos, but other video projects came along, and I all but abandoned the series. Watching films from “the book” still lived on though, but the videos seemed to fall by the wayside. Without the daily challenge and need to make videos quickly as we had done in EFC I, it didn’t provide a lot of pressure to get videos for EFC II done. I mean, we had all the time in the world to get to it, right?

Well, not exactly. To make things even more interesting, when I kicked off EFC II, I stated that I wanted to complete the challenge in just under five years, bringing an average movie watching of about 200 films per year. The reason for the five year goal? I would then be turning 30, and it seemed like a fun idea to mark this milestone birthday with a satisfying conclusion to a gargantuan task.

Then the years rolled on. 2013 gave way to 2014 and after four months, we had made three videos. Three! In EFC I we had done over 100+ videos in that time. 2014 bled over into 2015 faster than nobody’s business, and we had amassed five more videos, bringing the “grand” total to just eight, stinking videos. We recorded two more in 2015, but I didn’t even get around to editing them. As a great man once said: Enough is enough, and it’s time for a change.

Last month, May 2016, I realised I was now just only two years away from hitting 30 years old, and if I was ever going to buckle down, now was the time. In the past month alone, we’ve released nine videos, that’s one more than the first two and a half years of EFC II. That will soon be eclipsed though, as the videos will be coming thick and fast. Just like EFC I, the views to these videos have dropped dramatically from the standards of my regular content, but that’s okay, as this challenge is for me, and if people want to join me and Connie along for the ride, that’s awesome. If they don’t, they don’t, and nothing’s gonna stop me from reaching this ridiculously inconsequential goal.

Already I’ve watched a few films I never would’ve given a second glance, all because they’re in the book, even films that I wouldn’t have ever watched after my extensive branching out over the past couple of years. So already the book has done its job, but now it’s time to really take it to this bloody brick sized stack of photo paper, and power through all the wonderful (and not so wonderful) films it has to suggest.

As with EFC I, not only will the journey be chronicled on YouTube with the videos (which, at least for now, have a bit more production value than EFC I) but also here on the blog, with posts archiving all of the videos. These will also include my rating for the film out of 10, along with Connie’s where applicable, and whether we think the film is a “must see before you die” kind of deal. For reference, my 10/10 ratings are fairly loose and are given to any film I totally enjoy and love watching, but my 11/10 ratings go to films that I think are truly special, are masterpieces or one of the greatest films of all time.

So, with now just 25 months to go, and only 235 films watched from the book (there are a lot of videos I need to make, evidently, but I’m getting there), will I be able to make it? 866 films in just over two years? Hey, stranger things have happened. I’m not ruling out an eventual extension, but for now, I’m gunning for July 4th 2018, hard. Wish us luck.

One thought on “Introduction”